The Art of Feng Shui

The Art of Feng Shui

In ancient days, nearly all people were open to the laws of harmony and nature's powers and were able to intuitively perceive and use landscape formations, cardinal directions, and symbols. The effects of the natural elements and energies as well as the interaction of all matter surrounding us, were taken for granted and fully accepted. This sensitive perception was lost during industrialization. In addition, strong influences of different eras which were punishing the use of ancient knowledge, energies, and symbols, made a great percentage of precious ancient knowledge disappear.

Luckily this did not happen on the entire globe, so that we are now able to benefit from the precious detailed Chinese and Asian empirical sciences that are thousands of years old and firstly were used by the imperial court. In the same old way Feng Shui is traditionally used in Asia when searching for a piece of land or when designing a new building. As we traditionally buy chairs with four legs because we know they are secure and stable; now we have designers who have the idea to invent glas chairs with three legs...

Using only a few symbols or amulets, a Feng Shui master can detect, move, or support certain disturbing or auspicious energies. In every main Asian metropolis, Feng Shui is practiced in the biggest companies which helped to develop a complex system for success and wealth. Many Feng Shui principles and practices follow the laws of nature and harmony. The ancient Celts, Romans, and Greeks were already practising Feng Shui, even though they called it differently in those days. It is for them that most of our old buildings have a balanced, harmonic, and symmetrical design and are built according to the energetic conditions of the land.

In China, houses were traditionally angled towards the South, ideally having a waterbody in that direction. Accordingly, classic Feng Shui was applied with fine measurements and adjustments, placing certain symbols and objects in certain places. A form of popular belief developed that was not adapted to modern or energetic conditions, but was simply passed on. This form of cosmetic Feng Shui that is rather built on belief than on profound understanding of actual energetics is only as effective as the faith of each individual can move mountains. The classical teachings of Feng Shui from the ancient taoistic wise men are not a popular belief but are flexible like a bamboo and can be translated discreetly and straightforward into the modern western world, without the need of fans and flutes or the instruction of not using certain spaces.

It seems that knowledge of the advantages of practical Feng Shui is experiencing a renaissance. Not only private households have experienced the possibility and support that can be gained from an energetic consultation. More and more house builders and managers wish to obtain security and success for their construction project, considering the energetic conditions to their best abilities. Many examples show that it has great advantages to apply the knowledge of Feng Shui already when planning and positioning houses and buildings. The additional construction effort and extra expenses are in this stage usually minor, whereas the resulting flow of energy is noticably better. It therefore is generally advisable for every builder or architect to introduce a consultant in the very beginning who offers a profound and qualified knowledge of the art of Feng Shui. The Qi-Mag Institute gives a best possible training and foundation in its training for the Qi-Mag Feng Shui Consultant.

At this point, we would like to thank both associations for Feng Shui & Geomancy in Germany, as well as the Feng Shui Magazine. Their work contributes a significant part in the precious Feng Shui knowledge to find it's acceptance in Germany and here, too, to write history. We are greatful for these forums which offer a platform for different schools and teachers and hence make different methods accessable to everybody.

Are you interested in profound & contemporary Feng Shui? more... 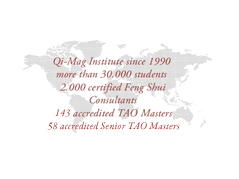 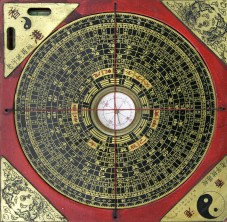